Founded by William Drury and his wife Vashti Lewis, early settlers and prominent citizens of Mercer County. William Drury's will provided that all of his property should be held during the lifetime of his wife for her benefit, she to have the income thereof until her death, and thereupon the property should all be converted into money for the establishment of an institution of learning which was to be named William and Vashti College, to be established in the town of Mercer County which would subscribe the largest amount for its location and support.

Aledo made a cash bid or bonus of $6,210 and the William E. Marsh collection of geological and paleantological specimens. At once a building to cost about forty thousand dollars was planned and a site for the institution was sought. The Hammond block was finally decided on, the price being $5,000. Four acres adjoining were purchased of Horace Bigelow for $1,200. A brick residence standing on the property was remodeled and made suitable for a residence for the school officials. In March, 1907, the contract for the college building was let to Harney Brothers, at $39,525, the structure to be 65 by 107 feet and to be built of brick and stone. The cost of the finished building alone was about forty-five thousand dollars.

On September 16, 1908, the institution was duly opened with an enrollment of sixty students. In 1909 Drury Academy was established as a preparatory school for the students who designed to enter the college.

The Mercer County jail building was given to the college, and the part of it which contained the cells was demolished and rebuilt, and used as the girls' dormitory. The building erected by the county for county officers was also transferred to William and Vashti College, and was situated on the block known as North Park or Monument Park in Aledo.

Soon it was seen that the endowment was not sufficient for the needs, expansion and success of the college. In January, 1911, meetings were held to devise ways and means of increasing the permanent endowment and hence the annual income. It was decided to try to raise $200,000 for this purpose and at once earnest and persistent efforts were made toward this end by organized bodies of both men and women. The Woman's College Federation organized and commenced active work. So effective was the work that by November, 1911, Mercer Township's donation to this endowment fund amounted alone to a little over one hundred thousand dollars. About twenty thousand dollars was obtained from other sources.

The school closed following the end of the first World War.  The decreased enrollment and lack of finances proved to be too much.  For several years the campus was usused with the exception of the administration building that was used by the local high school.  The campus and buildings were then purchased and used by the Roosevelt Military Academy from 1924 - 1973.

Since 1973 the Administration Building has been torn down and the spot was used for a retirement home called 'Vashti Village'. The remaining two RMA buildings (Niles Hall and North Barracks) are unused and in poor shape.  'North Barracks' was originally the men's dormitory of W&V.

From 'Past and Present of Mercer County, Illinois' October, 1914:

Since the opening of the school the trustees have acquired a building for the conservatory of music, and during the coming summer it is proposed to erect a girls' dormitory, the plans for its erection being now under way.

The attendance has steadily increased since the opening of the school until now there are about 300 students enrolled in all departments. A preparatory course is run in connection with the college and under the same management.

The students of the college are provided with all that goes to make college life desirable and profitable. The customary literary societies flourish, a Young Men's and Young Women's Christian association, the glee club, the oratorical societies and the press club are all well attended and excite a lively interest.

The institution is justly proud of the record it has made in athletics, not only because of the victories it has won, but because of the fact that its athletics have always been conducted on the highest possible plane, and the standard of eligibility for participation in athletic contests is of the highest. In order to participate in any intercollegiate contest a student must carry at least 12 hours of college work and be in good standing in all the work carried. From the first, athletics have been encouraged and the faculty has had close oversight and supervision of all the teams, one of the professors having charge of football, one of baseball and track and one of basketball. Athletic relations have been sustained with such schools as Augustana, Hedding, Lombard, Knox, Monmouth, Bradlev, Illinois Wesleyan, Iowa Wesleyan, Millikin, Illinois college, Shurtleff, Lake Forest, Armour institute, etc., and the showing which has been made is one in which every friend of the school may take pride. The success of the school on the athletic field is particularly gratifying for the reason that many of the best athletes who have represented the school have been boys who were born and raised in Mercer county, and many of them would have been unable to attend college and thus have an opportunity of participating in college athletics were it not for the fact that this school is located in Mercer county.

The athletic teams for the present year have all been strong. This is especially true of the football team which played eight games and won them all by decisive scores, thus acquiring the undisputed title of state champions. The prospect for football for the coming year is very encouraging. In basketball the team captured six out of ten games of the regular schedule, winning all of the games on the home floor.

The baseball team for the coming year promises to be as good as, if not better, than any in the history of the school, which considering the triumphs of the teams in the past, is speaking well for it. This year the baseball team will meet such teams as Augustana, Lombard, Hedding, Bradley, Illinois Wesleyan, Millikin and Illinois.

Many individual stars have been developed in track work in the past and some unusual work is expected from among the 300 students enrolled this year. Track meets will be held this year with Augustana at Rock Island, Bradley at Peoria, and the state meet at Peoria, May 24. The athletic spirit in the college is of the best and the slogan has always been, "Honorable defeat is preferable to stolen victory."

The athletic field on the campus is well drained and has a splendid baseball diamond and football field and a one-fifth mile track with 120-yard straightaway. The gymnasium is equipped with physical apparatus, baseball cage and a basketball floor 45x74 feet of playing space with a 22-foot ceiling. These facilities together with tennis courts afford the best there is in the way of recreation and physical exercises.

One proof of the unusual success which William and Vashti college has attained is the way in which it is regarded by the other small colleges of Illinois and adjoining states. At the time of the opening of the school in 1908, and for some time thereafter, William and Vashti was regarded by its sister colleges with indifference. No attention whatever was paid to the college and no comment was made concerning its work except to conjecture as to how long it would be able to eke out an existence. Its athletic triumphs first attracted attention and then it demonstrated its prowess along educational lines by splendid showings in competitive debates and oratorical contests. Before the school was two years old it was attracting marked attention from other colleges and was being observed somewhat more critically. Now it is regarded by all of the small colleges as a real rival in every sphere of action. 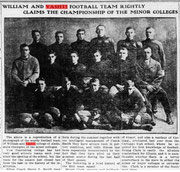